Ancient writers were not negligent in preserving for us the correct pronunciation of the entire sacred name. Despite Jewish and Roman Church prohibitions against its use, the vocalization of the complete name was revealed and is preserved by some of these writers.

The following are various sources which attest to the pronunciation of the Tetragrammaton as Yahweh (Yah-oo-ay).

JOSEPHUS
Before any serious discussion can take place regarding the true pronunciation of the sacred name, it is necessary to recognize that the Tetragrammaton consists of four Hebrew vowels. Josephus writes:

His (the priest’s) head was covered by a tiara of fine linen, wreathed with blue, encircling which was another crown, of gold, whereon were embossed the sacred letters, to wit, FOUR VOWELS (φωνήεντα τέσσαρα; phonhenta tessara).1

CLEMENT OF ALEXANDRIA
Clement of Alexandria (2nd century CE), for instance, tells his readers that the sacred name was pronounced ’Ιαουέ and ’Ιαουαί,2 both words which approximate the sound Yah-oo-ay.

GREEK VOWELS
It should not go unnoticed that these writers use only Greek vowels to represent the sacred name, again demonstrating that we are dealing with four Hebrew vowels.

It was understood in Hebrew that יה (Yah) carried the value of יהו (Yahu).6 Nevertheless, when it was transliterated into Greek, as it was by Origen, the value was lost. Yet both the first and last part of the sacred name (i.e., “Yah” and “ay”) were retained.

SAMARITANS
The vocalization of the sacred name was also preserved among the ancient Samaritans. The non-Israelite Samaritans, during the latter part of the 8th and early 7th centuries BCE, were forced by the Assyrian empire to settle into what was then known as part of Israel.

For example, in Samaritan poetry, we find that יהוה rhymes with words having similar endings and sounds as we find with Yah-oo-ay.10

THEODORET AND EPIPHANIUS
Some minor confusion has arisen because Theodoret, supported by Epi­phanius, states that the Samaritans of that day (5th century CE) pronounced the sacred name ’Ιβαι and ’Ιαβέ (Greek text), Jabe in Latin.11 Epiphanius ascribes the same pronunciation to an early Christian sect.12 In English letters, these words would be transliterated as “Yabay” and “Yabe” (or “Yabeh”).

ANCIENT GREEK
It is also known that the ancient Greek letter β (the text being first composed in Greek and then later translated into Latin) carried the value of the Latin “v” and not the English “b.”13 For example, the Latin name for the famous Gothic tribe that ravaged Europe during the later 4th and early 5th centuries CE is Vandali.14

PROCOPIUS
Yet in Greek texts, such as that written by Procopius, the name Vandali is rendered Βανδίλους (Bandilous).15 Because of this detail, some have contended that the third letter of יהוה (i.e. “ו”) should be rendered as a “v.” They propose that the name should, therefore, be vocalized as Yahveh, Yahva, Yahve, Jahveh, or some other like form.

THE “V” ERROR
The suggestion that the third letter of the sacred name should be read as a “v” is an error for two reasons. First, the Latin “v” is not equivalent to the English letter “v.” Harpers’ Latin Dictionary, for example, informs us:

The sound of V seems to have been the same with that of English initial W. . . . V has the closest affinity to the vowel u, and hence, in the course of composition and inflection, it often passed into the latter.16

The connection between the Latin “v” and the initial English “w” (as in the word wet), which is also the early English and Germanic letter “w,” is further attested to by the above example, the name Vandali, which in Old German is Wandal, and in Old Anglo-Saxon Wendil.

In the Anglo-Saxon and Germanic tongues, the Latin “v” was understood to mean “uu” or “u,” hence our present name for the letter “w,” i.e., “double u.” The modern letter “W” was originally formed by placing two Latin “v” letters together (“vv” = “w”).

1. the twenty-third letter of the English alphabet: its sound was represented in Anglo-Saxon manuscripts by uu or u until 900 A.D., then by Ƿ (wen) borrowed from the runic alphabet, or sometimes by wu, v, wo, vo, uo, or o. In the 11th century a ligatured VV or vv was introduced by Norman scribes to replace the wen. 2. the sound of W or w: in English, it is a lip-rounded tongue-back semivowel like a quickly cut-off oo at the beginning of words; concluding a diph­­thong it is a u-glide. Before r, as in wrist, and in some words, as answer, sword, two, it is silent.17

This fact means that the Greek “β” and Latin “v,” which come across into Eng­lish as the early Anglo-Saxon “w,” are in fact vowel consonants and like the Hebrew “ו” stand for a “double u” or oo sound.

This conclusion is further veri­­fied by a variant text reading belonging to Epiphanius. Here we find the Greek terms Ἰαβέ and Ἰαβαι are rendered into Latin as IAUE,18 once again demonstrating the “u” value of “β.”

The second reason that the forms Yahveh, Yehovah, or its variants are in error is due to the fact that the four Hebrew letters which make up the sacred name are all pronounced as vowels!19

If the Hebrew scribes believed that the third letter of the sacred name was pronounced as an English consonant “v” they would have used the Hebrew letter “ב” instead of “ו.”

For example, the word נגב (N-g-b) is often transliterated into English and vocalized by the Jews as “Negev.”20 Since “ב” is not used and the English “v” is a consonant, the form YHVH (Yahveh, Yehovah) or its variants are improper.

These details also lead us to mention a caution about the English form of the sacred name YHWH (Yahweh). The “w” must not be sounded like a hard consonant “w” but as a vowel “double u.”

The attempt to transliterate the sacred name from the ancient Samaritan language into Greek resulted in the forms Ἰαβέ and Ἰαβαι, which is understood to mean Yah-oo-ay since the Greek “β” has the value of an English “double u.”

RABBI MANA AND SAMARITANS
This fact is further supported by the Samaritan priesthood, which for centuries continued to pass on the early pronunciation of the sacred name to its succeeding High Priests.

That the Samaritans knew the correct pronunciation of the sacred name is confirmed by the Jews of the Middle Ages. In the Gemara Yerusalemi Sanhedrin, for example, we are told:

The following persons have no portion in the world to come: Abba Saul says: The same applies to him who pronounces the name (Yahweh) according to the letters. Rabbi Manna has said: Like the Samaritans do when taking an oath.21)

A great variety of transliterations of the name יהוה is found in the Greek and Latin Fathers. Clemens of Alexandria reads Ἰαοὺ, which doubtless points to the abbreviation יָהוּ . Origen” reads Ιαω, which is perhaps יָהוּ , and also Ια—lAH, which very probably represents יהּ . The most important reading is that found in Epiphanes, in his catalogue of divine names, and that of Theodoret,  who both write and pronounce Ιαβέ = יַהְוֶה . This pronunciation rests upon living tradition, as they claim to have obtained it from the Samaritans. THAT THIS WAS THE TRUE PRONUNCIATION IS ATTESTED BY THE FACT THAT R. MANA,22  WHO LIVED IN THE FOURTH CENTURY AFTER CHRIST, SAID THAT THE SAMARITANS PRONOUNCED THE HOLY NAME IN OATHS WHICH THE JEWS SHOULD NOT IMITATE. IF THE SAMARITANS HAD NOT EMPLOYED THE RIGHT PRONUNCIATION, THERE WOULD HAVE BEEN NO REASON FOR R. MANA TO MAKE SUCH A STATEMENT, SINCE TO USE A SUBSTITUTE, AS THE JEWS THEMSELVES DID, WAS PERFECTLY ALLOWABLE. Such substitutes were הַשֵׁם ; הַקָּרֹוֹש ; שָׁמַיִם . BESIDES, THE SAMARITANS HAD NO REASON, AS THE JEWS IMAGINED THAT THEY HAD, TO KEEP THE PRONUNCIATION SECRET.23

In other words, if the Samaritans had not known the correct pronunciation, there would have been no cause for the Jewish rabbis, who prohibited utterance of the sacred name, to condemn them.

SILVESTRE DE SACY
In the Third Epistle of the Samaritans to Ludolf, 1689 CE, the Samaritans still claimed knowledge of the true pronunciation.24 Subsequent to this, we have a letter from the Samaritan High Priest to Silvestre de Sacy in 1820.

Written in Arabic, this document contains a formula of benediction which gives the sacred name as “يهوه (Yah-oo-ay).”25

But: the Samaritans have preserved the old pronunciation of God’s name, which the Jews too had used in older times, but which they have dropped. So Yabai and Yabe probably maintain the old Israelitic tradition which the Jews themselves lost.27

It, therefore, is manifest that the ancient Samaritan form of the sacred name, revealed with the Greek letters (Ἰαβέ and Ἰαβαι), rather than creating a new variant, actually agrees with other ancient sources and with proper Hebrew vocalization of the four sacred letters as vowels. 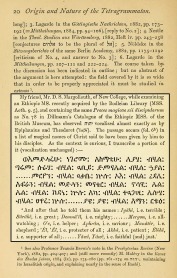 “As the context is curious, I transcribe a portion of it (VOCALIZATION UNCHANGED) :—”28

Most interestingly, Driver then proceeds to list two of the transcriptions for the name of the messiah as Iyâhê and Yâwê!

CONCLUSION
For one to arrive at Yahweh’s truth of any matter, we must adhere to the instructions given in Scriptures:

We have amply demonstrated the fact that the four letters of the sacred name are vowels and not consonants. Therefore, there is no need to insert vowel markings in the Tetragrammaton to render a correct pronunciation.

The fact of the matter is that the Masoretes deceitfully added vowel markings to the vowel letters of the Tetragrammaton to purposely hide any pronunciation of the sacred name Yahweh.

To those who insist that the sacred name contains the letter “v” which prompts the forms Yahveh, Yehovah, Jehovah, etc., it should be noted that the evidence does not support this claim.

The evidence from the ancient sources is overwhelming. The spelling for the sacred name is best rendered in the English language as “Yahweh.”

When one recognizes that the “w” is vocalized as a long “u” or “oo” the pronunciation of יהוה sounds very close to Yah-oo-ay or Yah-oo-eh.

Yahweh be with you.

Note: Adapted from a chapter from the publication by Qadesh La Yahweh Press that is titled The Sacred Name Yahweh.

Click this link for Bibliography and Abbreviations on pages 275-286.

This entry was posted on 12/11/2017, 11:06 pm and is filed under Religion, Sacred Name, Tetragrammaton, Yahweh. You can follow any responses to this entry through RSS 2.0. You can leave a response, or trackback from your own site.